This year, the Texas Criminal Justice Coalition turned 20 — and, as always, the TCJC team has been working to ensure that our mission is meeting the moment. Over the past several months, as the interconnected challenges of COVID-19 and racial injustice have earned the national spotlight, we have seen calls for improved health and safety approaches. As budgets are upended and incarcerated people remain at risk from COVID-19 outbreaks, TCJC’s advocacy to end mass incarceration and prioritize thriving, just communities feels more important than ever. I am proud of my team and deeply grateful to our supporters for remaining a persistent voice for reform, and for all we have accomplished together this year:

1. We convened the Statewide Leadership Council (SLC) to put system-impacted people at the forefront of the movement to transform justice in Texas. Our Senior Policy Analyst, Doug, spearheads the SLC in partnership with our Hogg Peer Policy Fellow, Maggie.

2. We launched the P.E.P. (Perception Equals Potential) initiative, bringing together a diverse coalition that seeks to dismantle the school-to-prison pipeline in Dallas-area schools; our Dallas County Justice Project Advocate, Leon, also released an article on undervalued youth and began hosting an ongoing series of P.E.P. Talks to examine education and youth justice in Texas.

3. We released a report (co-authored by high school student Jemima, our first-ever Youth Justice Ambassador!) on the need for restorative justice practices in Texas schools, based on conversations with students, parents, teachers, and administrators throughout the state. Especially now, as some students are contending with remote learning, we are fighting for restorative justice and mental health supports for students, not additional investments in school police.

4. We and our partners called attention to the War on Drugs in Travis County (Austin), including through an analysis of nearly 3,000 less-than-a-gram drug possession arrests, as well as community conversations and a forum for local District Attorney candidates.

5. As COVID-19 threatened correctional facilities, we sprang into action – making urgent demands of the Governor and other state leaders to reduce incarcerated populations and implement health protocols in youth and adult facilities across Texas, creating a petition signed by thousands of individuals, leading and participating in webinars, and signing on to numerous letters.

We also partnered with Doctors for America and Texas Appleseed to produce a County Criminal Justice Stakeholder Toolkit to guide advocates’ outreach to local officials as the COVID-19 pandemic began hitting local jails. And we called specific attention to the impact of COVID-19 on the local jail population in Harris (Houston) and Bexar (San Antonio) Counties. 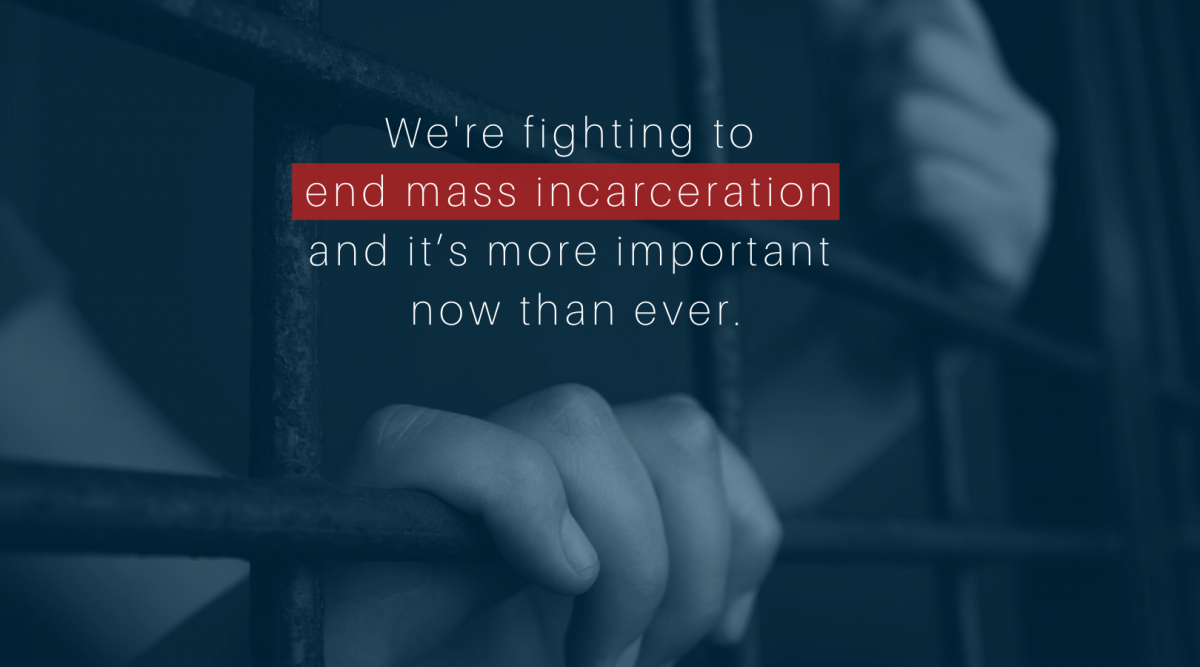 6. We released a report on the need for Second Look legislation, which addresses extreme prison sentences for kids as young as 14, while also producing a law review article for St. Mary’s School of Law and publishing an op-ed on juvenile lifers in the Austin American-Statesman. We will fight for this reform during Texas’ 2021 legislative session.

7. We released a series of bill implementation guides for new legislation on occupational licensing – one for people with criminal records, one for licensing boards, and one for administering schools.

8. We released a report on the history of our “Justice for Women” campaign and the insights from our first Women’s Dignity Retreat, where nearly 60 formerly incarcerated women, advocates, and service providers strategized about next steps in women’s justice; we also hosted a conversation with attorney Brittany K. Barnett – the daughter of a formerly incarcerated mother and co-founder of our Texas Women’s Justice Coalition – about her new memoir. Following a successful 2019 legislative session where 8 women’s dignity bills became law, we are continuing the momentum going into 2021. 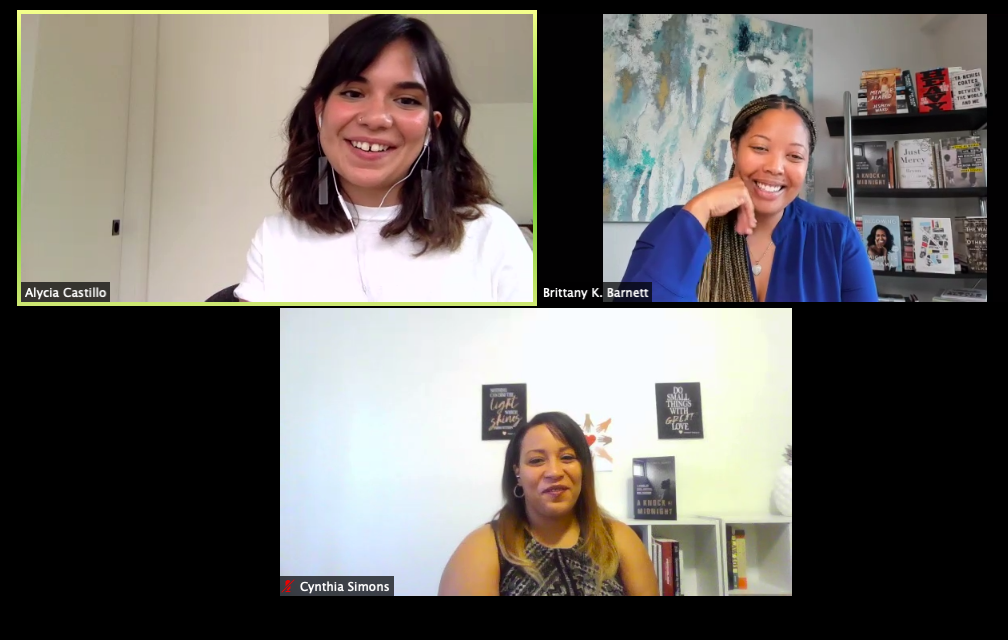 9. We launched data dashboards for Bexar (San Antonio) and Travis (Austin) Counties, as well as a statewide dashboard with Office of Court Administration data – putting hundreds of thousands of criminal case dispositions at users’ fingertips to help inform policy recommendations.

10. We have been calling for judicial accountability in Harris County, including through weekly reports with the Texas Organizing Project on how felony judges are illegally jailing thousands of people prior to trial, as well as through the production of individualized scorecards for some felony judges on their detained pretrial populations, a project with Harvard University.

We are also partnering with Restoring Justice on a monthly report series showing the (low) rates at which Harris County district judges are assigning indigent defendants to the Public Defender’s Office.

11. In addition, we partnered with Georgetown Law on an academic paper that has led to increased scrutiny of pay-to-play practices in Harris County, where judges reward attorneys who donate to their judicial campaigns – with worse outcomes.

12. We released a report on justice system involvement among individuals with intellectual and developmental disabilities – a new installment in our One Size FAILS All report series, which examines how Texas fails undervalued and marginalized populations, ultimately funneling thousands of people into the justice system each year. This report was produced in partnership with The Arc of Texas. 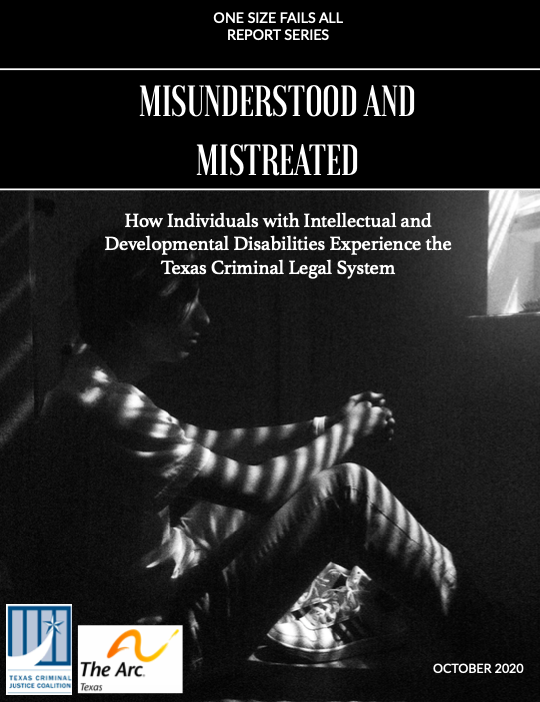 13. Our new Women’s Justice Fellow, Cynthia, launched the “Warriors From Within” project, which collects input from currently incarcerated women on a monthly basis to understand their needs, identify rising issues, and follow trends.

14. We have continued observing the bail lawsuit in Harris County, which was formally settled in late 2019 and increases access to personal bonds for approximately 85% of misdemeanor defendants; our Harris County Project Attorney, Jay, is assisting the individuals selected to serve as the Federal Monitor of the settlement, helping to oversee the county’s compliance with the consent decree over the next seven years.

15. We participated in Youth Justice Action Month (YJAM) through a series of 5 webinars led by our Policy Analyst, Alycia, which focused on youth involvement in the school-to-prison pipeline, the youth justice system, and the adult justice system.

16. Following the results of a survey of our supporters sharing their policy priorities for 2021, as well as an open letter to legislators urging them to prioritize justice reform, we issued our 2021 legislative guide, a 7-pronged roadmap to investing in safe, thriving Texas communities and divesting from the harmful, ineffective justice system. (Our portfolio was recently mentioned in the NYT here!) 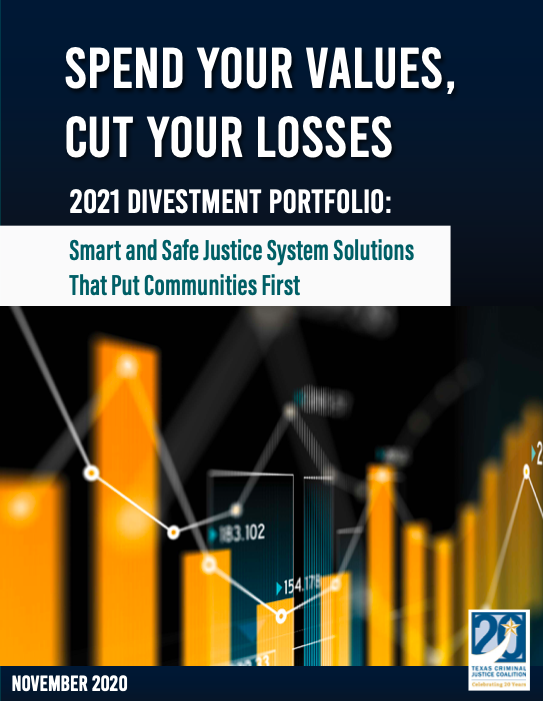 17. We submitted testimony to legislative committees in response to interim studies on prison oversight, school safety and student success, and prison healthcare costs; we also provided testimony in response to budget requests by the Texas Department of Criminal Justice, Texas Juvenile Justice Department, and Texas Education Agency. These efforts are laying the groundwork for our advocacy in 2021.

18. We have continued to expose the history of convict leasing and the Sugar Land 95 (victims of convict leasing whose unmarked remains were discovered in Fort Bend County in 2018), including through a series of webinars in partnership with the Convict Leasing and Labor Project.

19. We have called for accountability and racial equity practices among police departments in both Austin and Houston. Following the deaths of George Floyd, Breonna Taylor, Mike Ramos, and others at the hands of police, we released a statement on race-based violence from our team and later shared a more thorough and holistic approach to racial justice.

20. We are participating in the Survivors’ Project, a collaborative effort of more than 30 partner organizations and experts, which seeks to provide free legal advice and clemency assistance to survivors of trafficking and domestic violence. TCJC helped develop the intake form, and we are working to facilitate peer support for survivors, with TCJC staff becoming peer support certified.

Although this year has been difficult for all of us, I am immensely appreciative of what we have achieved together during TCJC’s 20th anniversary year.